I Can Taste the Mana

A blog about Hearthstone and sometimes other games

DISCLAIMER: I am being completely facetious here. Or whatever the opposite scenario is.

To show that they “care” about the Arena, the official Twitter of Hearthstone (@PlayHearthstone) occasionally tweets out a random arena draft pick, asking the viewing audience what card to pick. They seem to have expanded things to other Twitter users asking around. I do enjoy these tweets as I can use it gauge what the “average Joe” Hearthstone player thinks.

Some assumptions can be made about the average person replying to this tweet:

Anyways, it’s fun to see what people are saying. This draft screen was retweeted by @PlayHearthstone today from user Canberk Kaya. 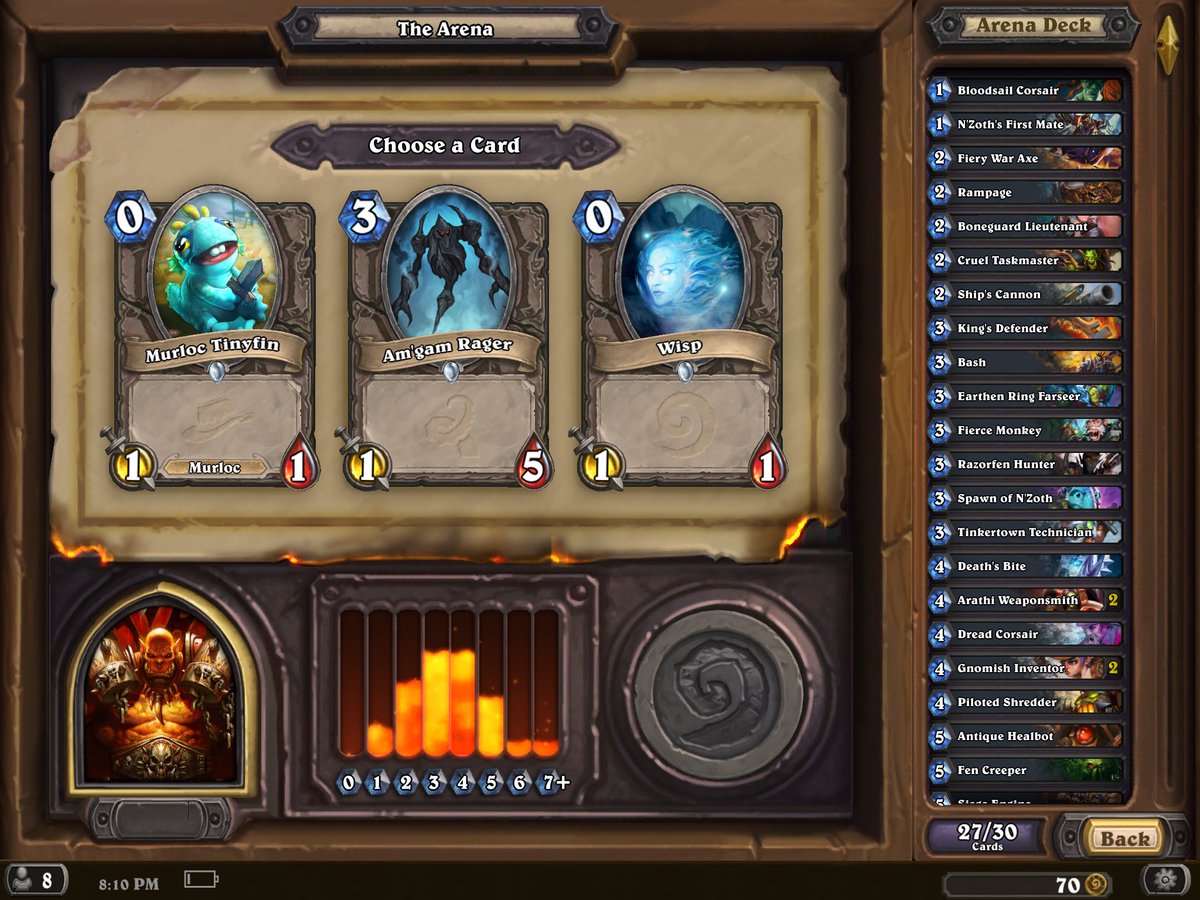 As you can see, 27 picks in, the deck itself is decent some premium picks in the weapons, Arathi Weaponsmith, Piloted Shredder and N’Zoth’s First Mate. This draft pick here kinda hurts though. You are faced with 3 of the worst cards to pick. Without a question, I think Am’gam Rager is the clear pick, but other users on responding had other strong opinions:

This string of tweets was not representative of the entire chain, some vouched for the clear Am’gam Rager pick and even the Wisp, but this consecutive chain of Murloc Tinyfin proponents is here to drive my point: people are needlessly obsessed with cute cards.

Pros and cons of each pick

So there. I do think Am’gam Rager is the clear pick, and Murloc Tinyfin is actually the 2nd choice, given the pros over Wisp.

Murloc Tinyfin would be a defensible pick over Am’gam Rager over certain scenarios though:

Further the argument against Murloc Tinyfin is amplified since the player is a Warrior. Warrior cards work when cards are hurt, and the 1/1 cards just don’t cut it, as they die right away.

All in all, this pick likely has very little effect on the Arena run, as they all suck. I just wanted to point out how blinded many are by Murloc Tinyfin.

I’m pretty sure Druid is my least-played class in Hearthstone, as it is a level 38 or 39 for me. It has always sat in the bottom three in my Arena classes, and I presumably only play Rogue in constructed. After 3 consecutive Druid Arena runs, it is now my 6th best class, edging out Hunter, and pushing Warlock for 5th best class. What gives? It turns out I had one card present in all three Arena runs: Addled Grizzly.

Addled Grizzly looks like crap. It is a 3-mana 2/2, which gives a +1/+1 buff to any minions summoned, while it is on the board. It is a rated a 34 on the Lightforge Tierlist, and a 50 on the HearthArena Tierlist. Hafu did like the card upon first glance in her card review. It is also rated “average” in Hearthstone Pro Players.

Flavor-wise, it is a bear that talks with a goofy voice. This might be confusing for people unfamiliar with Warcraft, but it is a shapeshifted Druid, who is likely talking in Night Elf form. So we’ve got a bear talking, but it’s really when he’s a Night Elf or something. And he doesn’t know where he is or what he’s attacking. Addled means confused, and is usually used in conjunction with drugs (i.e. pot-addled).

2/2 is like 1.5 mana worth of stats, so this is an anti-tempo play of 1.5 mana. The closest relative of this card is Shattered Sun Cleric, which grants the same buff, with Liadrin being a 2-drop body (3/2). This means the +1/+1 buff is worth about 1 mana. So you need to buff 2 minions for Addled Grizzly to be worth playing.

Addled Grizzly will never be a great card because of the described conditional effect. It must buff 2 things to be worth playing. This will always hold it back.

I admittedly picked Addled Grizzly in the first choice because the other options were really bad cards. I have been forever changed as a result of this happenstance.

Taunts are the top priority when you have Addled Grizzly. They just become better for the rest of the draft and help protect the Grizzly.

Charges get quite a bit of value from Addled Grizzly, as a +1/+1 on a charge is likely worth more than 1-mana, given that charge minions are rather under-stated. Chargers have lots of utility, as they could protect the bear, clear a big minion, or just push face damage.

Tokens get an instant buff from Addled Grizzly, which makes them the clear value play, in getting as many things out on the board, with more power.

As a Hearthstone player who disproportionately enjoys the Arena more than Constructed, I spend time looking at Arena tier lists quite a bit. Because of a seemingly prolonged slump, I have been back to using drafting guides recently. As the goal of the Arena is to have a deep run, and reap good rewards, it is always a good idea to have information to help draft a better deck.

The Old Gods meta has been admittedly rough. I’m seeing a lot of runs end at 2 or 3 wins. 5-6 win runs are becoming rare, while I get some 7+ runs here and there. As I continue my eternal quest to get back to a 5 win average, here are some impressions I have had on some of the Old Gods cards in the Arena. I have either played the cards myself, or have seen them commonly by the opposition. I’m also showing the tier list scores from two popular tier lists, The Lightforge and HearthArena.

This week in Hearthstone news, an article published on GosuGamers called “Enough is Enough” detailed the struggles of a Twitch moderator in trying to control a seemingly extremely raucous Twitch Chat for the DreamHack Austin Hearthstone Grand Prix. I don’t think I was able to watch any of it, besides a few games of Kolento vs Eloise, but I am well-versed enough with Twitch to know what the issue is all about. Instead of really taking a whole side in this argument, I’m going to bring up random points, and ramble about them in my point of view.

Hearthstone is over 2 years old, and players have been duking it out Wizard Poker style well before that in the beta stages. It’s safe to say that some cards are more well-known than others, owing to either effectiveness in the meta, being nerfed, or just being well-known for some inexorable reason. Take Annoy-o-Tron for example.

Annoy-o-Tron had utility when Mech Mages roamed the earth, but they weren’t typically a staple card. It’s still pretty good in the Arena, at all phases of a game. But Annoy-o-Tron became a factotum of Hearthstone because of it’s effective absurdity. The card fit as being good, but wacky and a butt monkey of GvG. These qualities allowed Annoy-o-Tron to have it’s own Tavern Brawl and have it featured in Hearthstone commercials.

As such, another really well-known card amongst the Hearthstone community is Animal Companion. And of course, Huffer. Just plug in “always Huffer” into Google, and you’ll find 276,000 results.

“Always Huffer” refers to Animal Companion always getting Huffer. Typically, this applies to your opponent playing Animal Companion, and having a 4-attack charge for insta-reach, and allowing cards like Kill Command to hit face. In a recent and spectacular Hearthstone cartoon, “always Huffer” was cleverly invoked with the Random Animal Generator (R.A.G.).

Last night, I had my first successful Arena in a few days, taking a Hunter to 8 wins. And the deck had 3 Animal Companions. Through the run, I realized it wasn’t always Huffer. In fact, it was infrequently Huffer! I went back and looked at my Animal Companion summons over the 11-game Arena run.

In my Arena, I got Misha over half the time. And I can’t argue with the results, given we are in the “taunt meta” in the Arena, where taunts are just really good. Anyways, I’ve come to some conclusions about “always Huffer.”

DISCLAIMER: This post has nothing to do about drawing all your cards in Hearthstone

It’s only a Thursday, but I have had a very exhausting work week. Without getting into specifics about work, the last few days have been a whirl of nonstop meetings, phone calls, emails, people interrupting the quiet of my office, etc., all the while dealing with staffing issues, a couple deadlines, and my regular weekly load. While work-related exhaustion has always eaten away at me slowly, I have hit a point this week where it has affected my ability to play games. I struggled to get through the Tavern Brawl free pack, with really long games of Webspinners forking out mediocre beasts, and people who spent a lot of time thinking (and roping sometimes) during said Brawl. My exhaustion was undoing my preferred outlet of relieving exhaustion!

This prolonged lethargy made me think about having some coffee. While I always thought that the link between energy drinks and esports is silly, I do understand now that gaming is exhausting. And especially a game like Hearthstone, which is above-average in draining the mental faculties.

How do you muster the energy to play video games after a long day? How do you sustain playing games hours on end? Any suggestions welcome.

When I started this website, I entitled it The Tavern Blawg with the promise that it will, at least occasionally, touch on the “law” side of the “Blawg.” A few days ago, Polygon published an article (linked here) that found its way onto my twitter feed. The article discussed how Youtube will soon change the way […]

via Youtube and the “Fair Use” Copyright Exception — thetavernblawg

April 2016 was a big month in the Hearthstone world. The pent-up anticipation for a new expansion, sparked by street murals of all things, resulted in the release of Whispers of the Old Gods. Nerfs to the Standard set forced players to try out new cards to replace those lessened. Further, Standard play came by, forcing players to play a whole new game. The expansion isn’t even 1 week old, and most of us are still trying to figure things out.

For me, April 2016 included a complete meltdown in my Arena play, forcing me to play Ranked for a good portion of the season. Now I am in a better place in the Arena, and enjoying the new Ranked meta as well.

Now we can look back and laugh at the time RDU got disqualified from something because of the Khadgar bug.

Even Druids got tired of playing the combo before launch.

My first and last GvG packs had One-Eyed Cheats.

Anamolus has a pretty sick animation. Only got the beginning here.

This purple gas is maybe what Pikachu didn’t want to become Raichu.

Here Anduin, got you this orange skin cream.

I got Yogg-Saron and was forced to play him. Now I am forced to do crazy and unpredictable things…

Purple Valeera is back!

I swear I had a bigger one somewhere…

First of many Pyroblasts to the face!

“Wow” emote is a gamechanger

Valeera always had the red clothes and green knives, so she can put up the Christmas tree too.